When it comes to building an app, how would you pick between Android and iOS? According to Statista’s statistics, Google’s Android has around 88% of the global market share in the second quarter of 2018. As per statistics, you can decide to develop an app on Android OS, but how can you ignore the high monetization prospects that iPhone app development platform provides? An easy solution should be to build an application for both platforms at the same time, but not every organization has a budget for both.

Thus, which platform should you select for your business app development? It’s a common inquiry huge numbers of our clients ask us when they approach us for developing a mobile application. The fact is that both platforms have a considerable amount of pros and cons and monitoring these makes it simpler to choose which one is best suited to your needs. In this blog, we will focus on key differences between Android app development vs iOS app development to help you get a clear idea about which one to pick for app development.

According to market share, Andriod has been growing platform in the world since 2016. In 2018, 217.72 million iOS smartphones were shipped by Apple. According to market researcher Gartner, Android sold 1.3 billion units in the year 2017.

According to a recent survey as per Statista, the number of apps available for download in app stores as of 2nd quarter 2019. Google Play Store had 2.46 million apps whereas the Apple App Store remained the second-largest app store with around 1.96 million available apps. 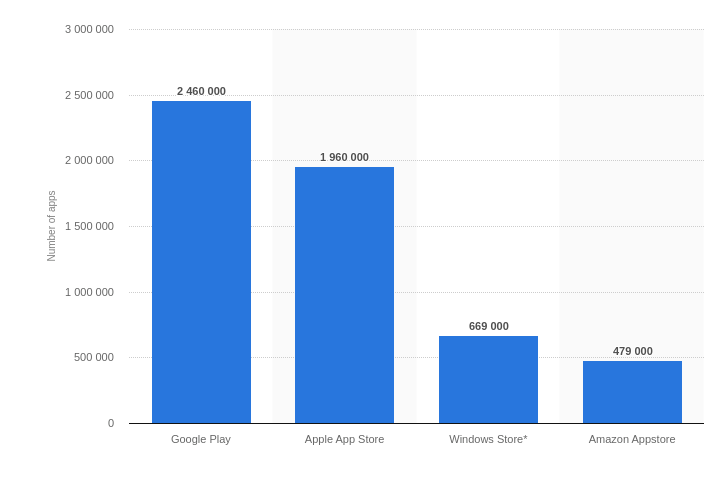 When we discuss app revenue, the difference between Android and iOS is the bigger reach in-app revenues. In 2018, Apple’s iOS apps generated $46.6 billion, whereas Google Play revenue stood at $24.8 billion. An iOS App Store is the place to be for app revenue. (According to Business of Apps Statistics (2019))

Mobile app development is less complicated for the iOS platform compared to Android because Apple has a less number of devices – iPhone, iPad, and iPod. One of the primary issues with Android app development is that of fragmentation as there are numerous kinds of devices, smartphones, and tablets, besides differences in screen sizes, aspect ratios and operating systems.

It is not easy to estimate the difference in cost since one needs to consider not just the time that is taken to build an app but also the hardware used for the process. Android applications may have a greater expense because of the longer development time, the Android Studio application that is used for application development can be installed on a standard PC whereas iOS applications are created using Xcode, which works only on the Mac. Hence, the investment in purchasing a Mac as well as an iPhone or iPad can significantly add to the cost of development.

Which Operating System (OS) is better – iOS vs Android?

Which one is easier to develop an app for iOS or Android?

Apple’s strict controls imply that a longer time is spent waiting for the application to be approved, while Android applications can be uploaded effectively on Google Play Store after a one-time payment.

Which is less expensive – Android vs iOS app development?

Mobile app development cost depends on a few factors, including the time, resources and equipment or hardware used in the development process. While iOS app development takes less effort to create, they require a noteworthy investment in hardware as the development and testing can be possible only on the Mac, iPhone or iPad, which are more costly than the standard PC as well as the more reasonable range of Android smartphones.

At last, selecting the right platform relies upon an assortment of elements, for example, time to market, budget plan and the scope of the application. Would it be advisable for you to select an Android application development that provides you access to a broad audience but at a lower average revenue per user or and iOS application that has more noteworthy prospects for acquiring revenue? The details in this blog will help to answer these inquiries, there’s no definite response about which one is better.

What would it be advisable for you to pick – Android versus iOS?