Today, web application developers have a wide range of options available when it comes to picking a programming language for web apps development.

These programming languages are not just viable for frontend development of an app, but the backend development too. Clear yet hidden, it consists of all the business logic and sensitive operations. Now, talking about the quality of an app, there are several determining factors like its ability to perform well and scale perfectly along with the maintenance of code and the entire system security. The above- mentioned factors have a direct link with the quality of the web application’s backend. Thus, it is always important to go for the right tool for the project.

Of course, we look forward to a host of options while choosing the tech stack for back-end development. Getting lost within the diversities of Ruby, Nodejs, Go, Python, PHP, and then taking the decision without much knowledge of the intricacies of these technologies might be a laborious affair.

However, we can lessen your task. So, in the section below we would give you a run-through of technologies like Nodejs and Golang, both their benefits and adversities as these two have been considered the most potential technologies in recent times.

Something more about Nodejs:

Nodejs is a JavaScript runtime environment based on Google Chrome’s V8 engine. Initially introduced at JSConf in 2008, this is a cross-platform open-source tool mainly used to create web servers. This runs JavaScript code, thus enabling developers to write both the server-side and client-side code without dealing with the problem of learning two completely different programming languages. Prominent companies like Netflix, eBay, and Groupon have already used Nodejs development services for full-stack web development and are now the most widely used JavaScript framework.

Go or Golang, is an open-source, statically typed, composed, cross-platform, and lightning-fast programming language which got its first introduction in 2009. This is for multi-purpose use, thus a good language for backend development. As per the reports of the Tiobe Index, Go became the Programming Language for the Year 2009 and 2016. Web apps using Go lists Uber, BBC, SoundCloud, and Basecamp. 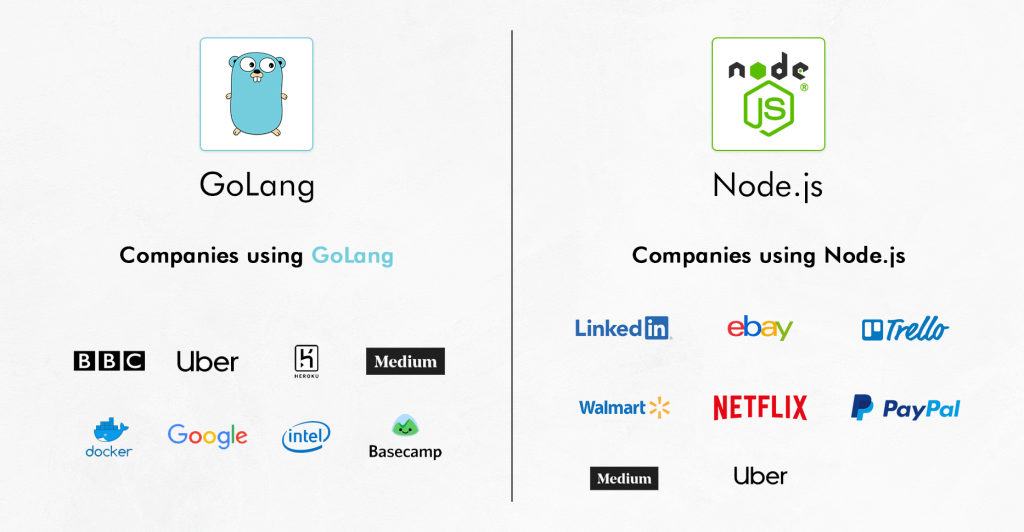 So, after the quick intro, let us study the comparison between the two and get to see the ultimate winner.

In this regard, developers relate the performance of Go with C and C++, which is excellent. Go has no virtual machine and assembles to machine code, thus executing programs at a faster pace minus the warm-up time.

Also, Go is the perfect solution for building microservices owing to its tiny memory footprint and fast performance of Go apps, coupling with the convenience of statically linked binaries.

Thus, the winner remains indecisive. But one thing is clear that there is no tailor-made language or universal tool for all projects. The secret is to spell out the requirements and needs correctly.

Also, to hire for the best GoLang web development services, opt StarTele Logic company. We promise you the best professional services in the area of the development of GoLang.

The recent times depict that its almost essential for every business to opt for the right framework for a new JavaScript system, an application or a website. This might have a direct impact on the project’s duration and...

Whether you want to enhance the productivity and speed of your business internal operations or give your customers a memorable experience of your brand/product/service, you will need an application to do any of that...